It’s A Time Of Deep Reflection.

There Is No Chair.

On Friday I came across this pic from the New Scientist. 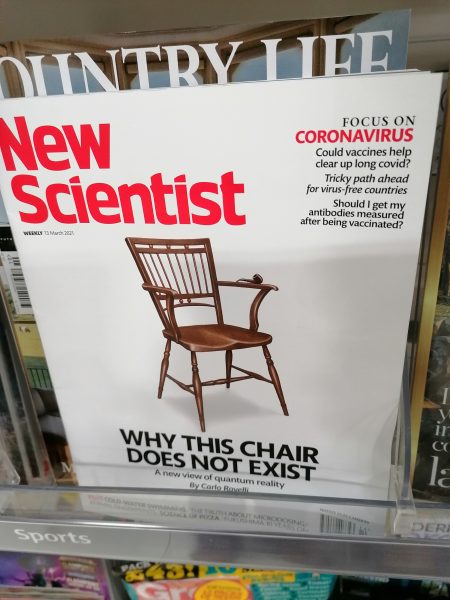 And as I started writing this article I realised I was sitting on the Chair. Its a bit battered and bruised these days but very comfortable with a cushion.

Over the last year the Quantum World has become a very real place for me and I think a lot of what happens ‘Out There’ is also a reflection of the new quantum reality which is why much of it doesn’t make a lot of sense to a mind which sees the world through eyes of one Self in linear time.

Yesterday for our Saturday movie, Jenny and I watched a film called Freaks. It is set in an alternate reality where there is a war between individuals with psychic powers and muggles is a good description.

Just a few things from the movie. In Freaks the psychic powers were described as Weapons Of Mass Destruction. And this showed up which follows a pattern.

And Dolly the Clone sheep.

‘Seems to be saying something’. Thanks to MJ.

From The Life Of Dolly :

‘Dolly was cloned from a cell taken from the mammary gland of a six-year-old Finn Dorset sheep and an egg cell taken from a Scottish Blackface sheep. She was born to her Scottish Blackface surrogate mother on 5th July 1996. Dolly’s white face was one of the first signs that she was a clone because if she was genetically related to her surrogate mother, she would have had a black face.

Because Dolly’s DNA came from a mammary gland cell, she was named after the country singer Dolly Parton.’

At times it feels like Life is an episode from Fringe. And even the JFK pic above melds into the actual TV series.

‘John F. Kennedy was never assassinated and is still alive. He became an ambassador to the U.N. sometime after his presidential term ended. A news article states that he is planning to resign his ambassador position in order to lead a new agency aimed at slowing ecological breakdown.’

And Meghan Markle in Fringe.

‘Someone’s Watching Me’ and the SS.

The Man In The High Castle.

Who Won The War ?